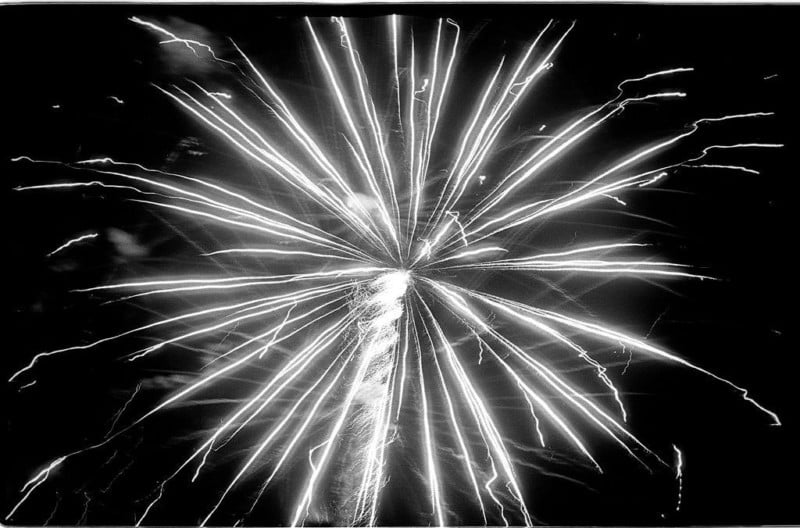 There they were, a continuous, almost organized line of middle-aged men in various stages of unfolding tripods, mounting massive DSLRs on them, carefully aiming long lenses at indeterminate points in the darkening late evening sky. The LCDs lit their faces with a soft glow as they took test shots and talked among one another while fiddling with various items from their giant bags of equipment.
I stepped into an empty area among the photographers and leaned towards the grey-haired gentleman beside me. “Is this spot taken?” He murmured something, lifted his glasses over his head, and stuck his eye on the viewfinder.

From my small Domke bag, I removed my tiny, old black camera and held it up to the sky. I unscrewed its little lens and tucked it safely in my bag. I noticed a guy watching me but he didn’t speak, so I didn’t either.

I removed the bottom plate, sitting it in my bag with the lens, then set my shutter to bulb mode. I threaded and loaded a roll of film, tested the advance, then reinstalled the bottom plate. The available light was just enough to observe the rewind knob rotate as I advanced the first frames of film. I didn’t bother setting the frame counter; soon, I wouldn’t be able to read its numbers in the darkness anyway.

With no lens on the little black camera, I pointed it at the sky, looking through its viewfinder. I pulled another lens out of my bag and screwed it onto the camera firmly. I removed the small lens cap, dropped it in my pocket, and topped off my outfit with the accessory viewfinder. 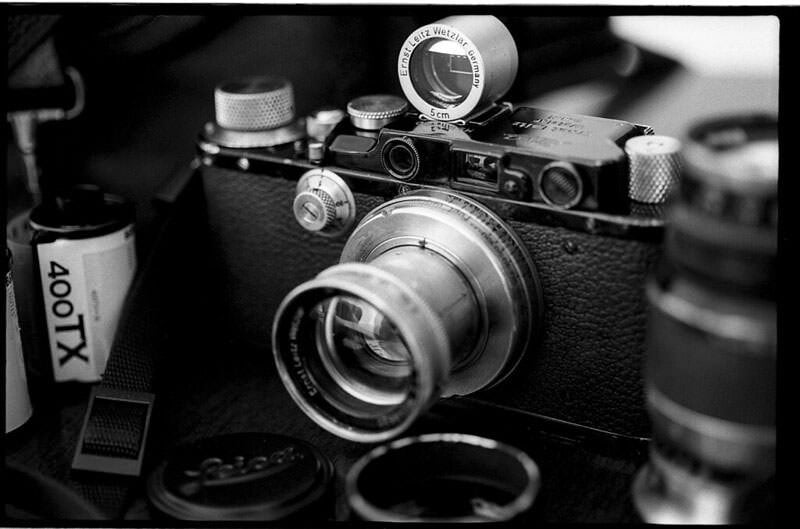 By now, a few guys were watching me. One tapped my shoulder and asked, “what are you gonna do with THAT?!”

“Me? I’m going to shoot the fireworks.”

“How old is that thing anyway?”

The man smiled at me as I spoke but I couldn’t be sure if he thought this was as neat as I did or he thought I was being ridiculous. Either way, his mind seemed sufficiently blown. “Okay, well good luck!” 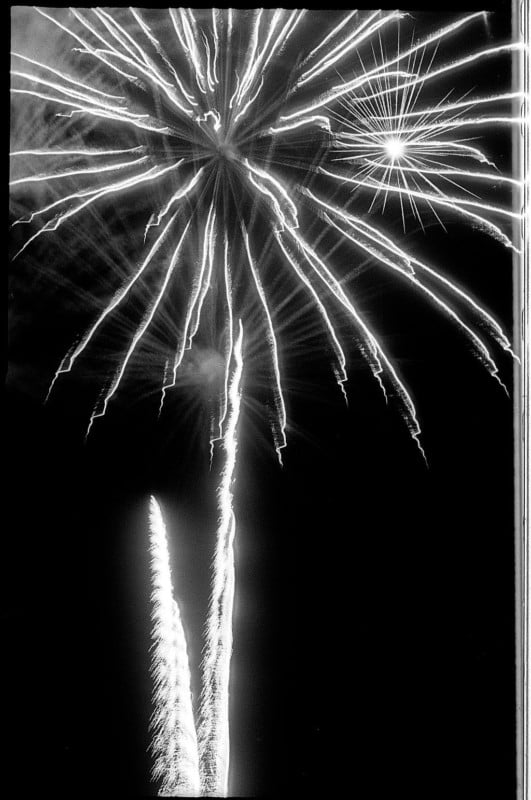 As the fireworks began soaring into the sky, I watched the first several to get a feel for framing and pace.

Shooting with my 1930 Leica is meditative, simple, and liberating. The sum of my equipment could barely fill two open hands and involved no electronics, yet was arguably just as capable as any of the new, complex rigs around me.

In order to operate a modern camera to do something as simple as photograph fireworks, the shooter needs to switch off of all the expensive gizmos and do-dads that people here had put so much money and time into choosing and buying and learning to use. And what is left? A light-tight box. By now, it was too dark for me to be sure what I set my aperture to but I had enough latitude with the Tri-X that I wasn’t concerned. I think that I was at about f9 because the Leica 90 Elmar doesn’t have an f8. In fact, it doesn’t even have click stops! So I rotated the brass aperture ring to the smallest aperture and then opened up a little bit to counter any diffraction. This lens is pretty sharp with its simple triplet, single-coated optics. It exhibits some of that classic Leica glow around the highlights. 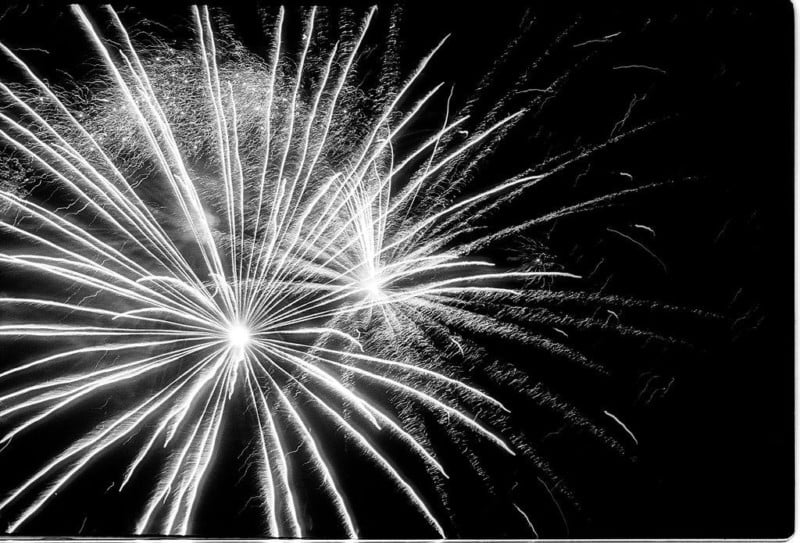 I don’t know what all the autofocus motors were doing all night but I set the 90 Elmar to infinity and never even looked through the rangefinder to check focus. I had a bright, brilliant view through my Voigtlander 90mm viewfinder. This is something I really enjoy about Barnack Leicas, the complete separation of focusing from composing and any meter display. When you’ve got your settings locked in, all there is to do is watch your subject and FIRE! 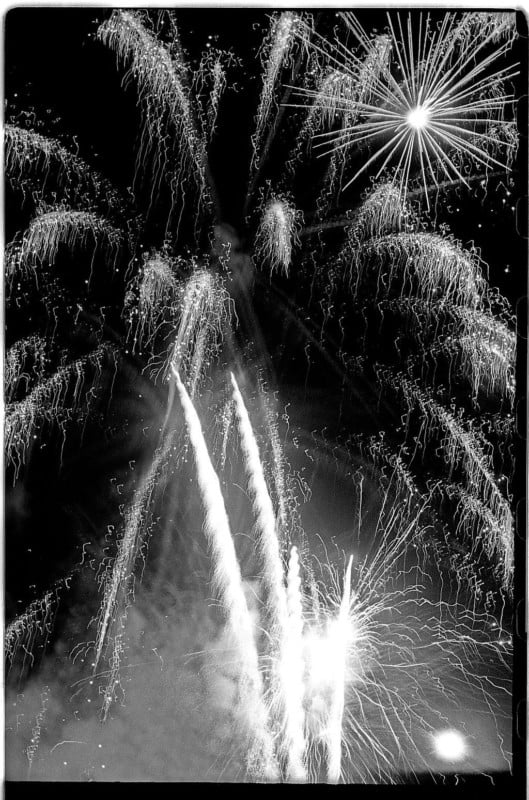 I chose Kodak Tri-X, a 400 ISO film, instead of a 100 because I had been shooting stream-of-consciousness photos earlier in the twilight with my 50mm f2 Summar at this speed. And also because I thought the contrast that Tri-X delivers would be killer on the fireworks. In this regard, I don’t think there’s any doubt that the film delivered in spades! 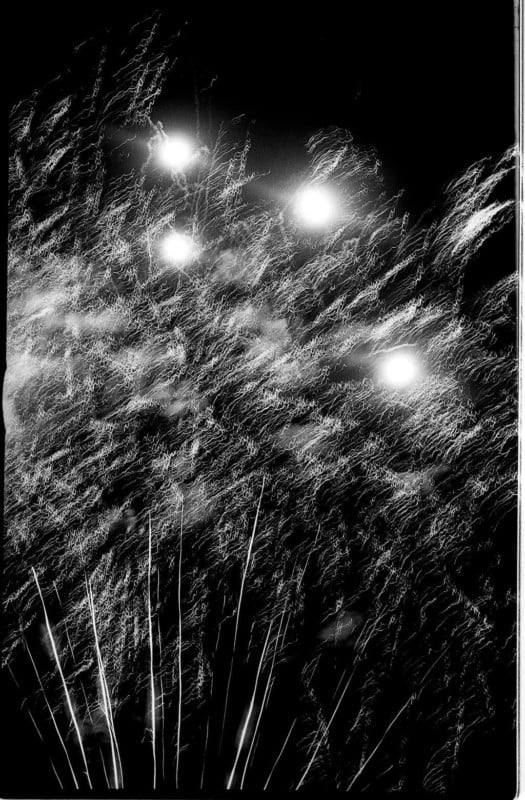 My shutter was already set to bulb from loading the camera and I kept it there. When shooting fireworks, same as I did with my Fuji Instax Neo 90 a few years ago, the idea is to open the shutter while the firework is in ascent to give you an image of its trail and not to close the shutter until after it has exploded fully. 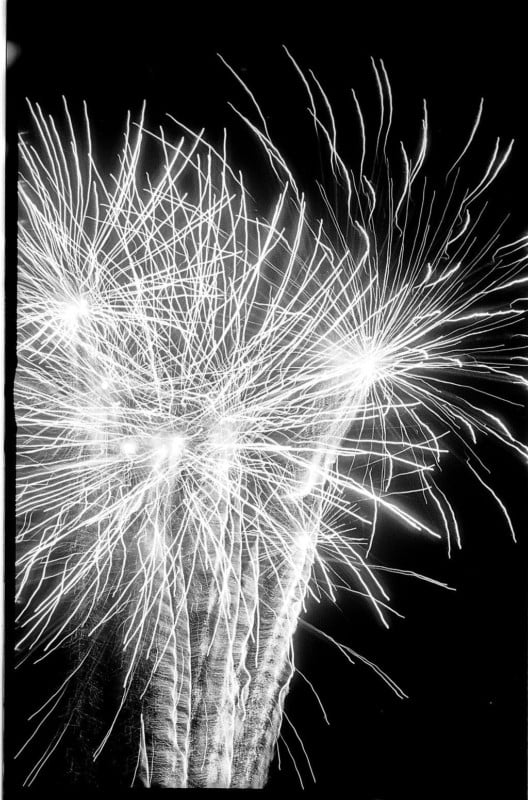 And I didn’t use a tripod. I wanted to move freely. And also I was curious to see how the small, lightweight Leica without a flipping mirror would handle without formal camera support. As I released the shutter, I held my breath and tried to hold the camera tight against my face/head and arms as rigid as possible but I guess that wasn’t enough.

Notice the wiggly trails? That is the camera shake. Those lines would have been faithful to their paths had I just used a tripod. I guess I was pressing my luck by using a short telephoto, bulb shutter, and no sticks, but you know, there are no rules. There’s nothing inherently wrong with wiggly lines in firework photos, it’s just a different result than what is conventionally desired. And I’m happy with these, though I may bring my Leica tabletop tripod next year! 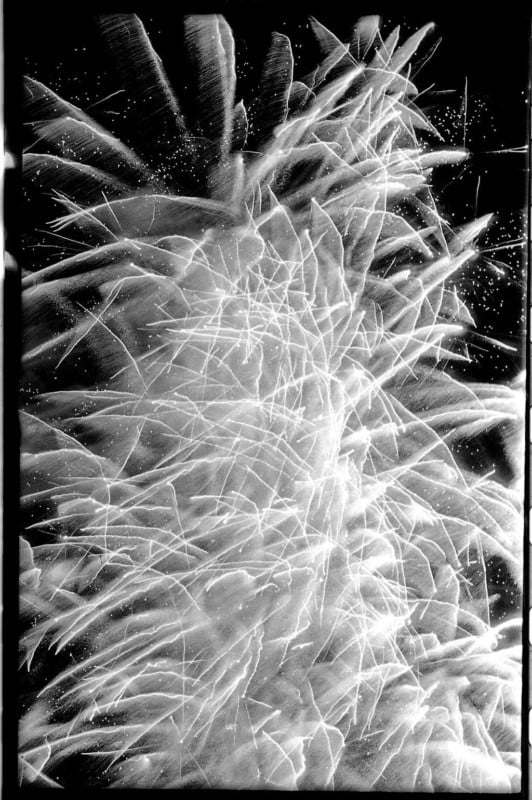 I processed the Tri-X in HC110b as I usually do and when I pulled the negatives from my Patterson tank, they were bursting with tone and depth! Once digitized on my flatbed, I had plenty of room to play with levels in Photoshop. I brought my black point in pretty generously and then burned highlights until surrounding midtones were also near black. Not only did this bring out a lot of detail in the highlights but it gave the scans a crispy punch that they were lacking before burning.

In black and white, rather than ubiquitous color, these fireworks images take on a bit of an abstract quality that I quite enjoy. There’s something old fashioned about them yet I feel that they are also sharp and contemporary.

These photos and the text depict July 2019

About the author: Johnny Martyr is a East Coast film photographer. The opinions expressed in this article are solely those of the author. After an adventurous 20 year photographic journey, he now shoots exclusively on B&W 35mm film that he painstakingly hand-processes and digitizes. Choosing to work with only a select few clients per annum, Martyr’s uncommonly personalized process ensures unsurpassed quality as well as stylish, natural & timeless imagery that will endure for decades. You can find more of his work on his website, Flickr, Facebook, and Instagram. This article was also published here.